The following article was published on the website of FICS, the International Sports Chiropractic Federation.

The Masters Powerlifting Championships in St. John’s in October was an eye-opener: with 410 lifters from 33 countries, it was a pleasure to see world records set and the camaraderie amongst them as they renewed friendships and competition. 33 countries meant several languages, and fortunately between us we had skills in 4 of them, but there was still a certain amount of pointing and hand gestures for both athletes (and ourselves) to get their point across. It didn’t take long for the lifters to realize we were there and then it was go-time. Gaston Parage, the President of the International Powerlifting Federation is a big advocate of chiropractic and FICS and was treated as well 3 times. 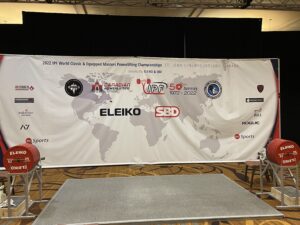 Areas of complaint tended to be shoulders, hips and low backs. Many would come for care and shrug their shoulders and say, “I’ve been powerlifting for X years and my low back is always sore.” We did notice, however, that although it may not have been an area of complaint, the thoraco-lumbar transition area seemed to be an area of improper mobility and muscle hypertonicity and working on that always brought relief. One lifter had a hard time understanding that his shoulder was “weak” due to rotator cuff instability and this was causing his shoulder pain with benching. With a little education, he came around to it and was going to seek further help once returning home to Costa Rica.

There were 2 actual low back sprain/strain injuries, a quad strain and one Brazilian lifter who during his squat, crumpled in pain and had to be helped off the stage. Seeing him in agony, the differentials springing to mind included disc lesion, hernia or groin strain. After exam and further history, we settled on groin strain and decided there was no need to transport for hernia assessment. Communication with the athlete, coach and event organizer were all key at this time. It turned-out to be the right call as he continued to hobble for the next couple days, but stopped by the table for a fist-bump to confirm he was feeling better and coming around. 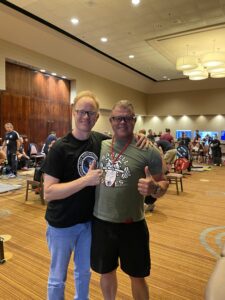 St. John’s is a city that has been on both our bucket lists to visit and this event was an ideal opportunity to enjoy this lovely city and its people. The IPF ran a great event and is clearly a tight-knit bunch from the top down. Neither one of us would hesitate to be involved with them again.

Non-invasive, pain-free, light-based laser therapy in Victoria that uses red and infrared light to target inflamed, injured and diseased tissues. Laser acts to stimulate the cells responsible for healing and results in: repair and regeneration of local blood supply,...

END_OF_DOCUMENT_TOKEN_TO_BE_REPLACED

Movement assessment can be used to determine quality of movement for an individual and can give an indication for why they may be having pain or restriction. A movement screening tool that both Dr. Strudwick and Dr. Quinn use is the TPI (Titleist Performance...

END_OF_DOCUMENT_TOKEN_TO_BE_REPLACED

Chiropractic and Neck Pain If you have pain in any part of your body, it can range from uncomfortable to downright debilitating. In the case of your neck, any degree of irritation can impede your ability to function. Because of this, it is important that you learn...